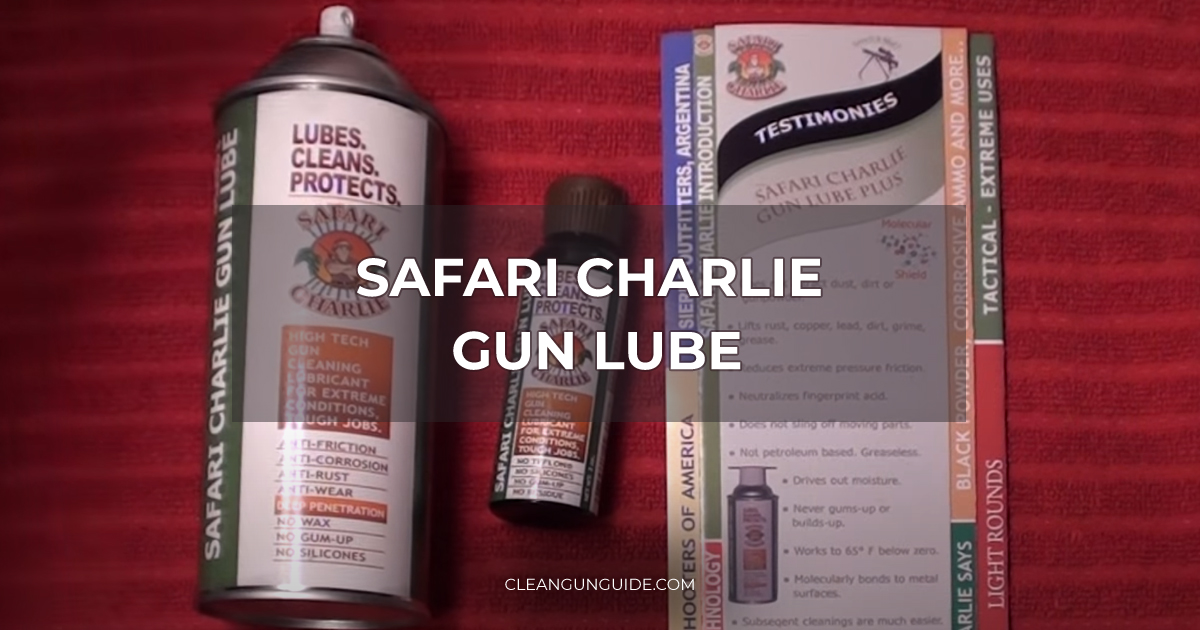 Safari Charlie Gun Lube is a synthetic lube that doesn’t contain silicone, wax, graphite, or Teflon. It is a cleaner, lube, and protectant, and it is formulated to lift carbon residue, grease, grime, dirt, and rust.

The lube does not have a pungent smell of chemicals, as you find with some other gun lubes. Some users who have used it say that it smells like fresh oranges. This is not a bad thing, although some people prefer odorless gun lubes.

That said, the gun lube is made in the U.S., and it has gained plenty of favorable ratings and feedback over the years. Many users say that it is effective. It cleans and lubes well, and it’s not messy, which is what many gun owners like in a quality gun lube.

So here are some key functions of the Safari Charlie Gun Lube in more detail.

The Safari Charlie gun lube is formulated to remove powder residue, dirt, grease, and grime. Its unique formula does not contain any ingredients that attract dirt, powder residue, or dust.

It does not dry out or evaporate, which allows it to work its magic of removing carbon fouling, dirt, and grime. Based on user feedback, the lube does a good job at removing all kinds of dirt and powder buildup, and you don’t need to use much of it. A few drops will do the trick.

This lube is said to remove stubborn carbon fouling and gun powder burns.

Safari Charlie gun lube does more than cleaning; it’s also a lubricant. Every gun owner knows that it is important to lubricate a gun to protect its metallic parts from corrosion and rust. It also protects the moving parts from friction and heating, which can affect the performance of the gun.

The unique formula in this gun lube does not dry out or evaporate, and therefore, leaves a thin film of protection against corrosion. It’s also important to note that it does not attract dust or dirt.

Also, with this lube, you won’t experience gumming, which you get with petroleum-based gun lubes. Gumming together with carbon and dirt buildup causes friction, which as a result, causes the moving parts of a firearm to wear out quickly.

The lube also neutralizes acid from fingerprints and repels moisture giving your firearm the much-needed protection against the effects of use.

The lube leaves a layer of protection without being slimy. It provides long-lasting protection, which is important, particularly if you don’t use your gun regularly.

To keep your firearm in good working condition, you need to ensure that it’s properly cleaned and lubed before storage. Lubing your gun will not just protect it from rust and corrosion; it will also extend its life.

Some of the key advantages the Safari Charlie gun lube offers include:

There are many gun lubes out there, all of which claim to offer your gun protection against rust and corrosion and remove dirt, grease, and carbon powder. It’s all a matter of finding the right one.

The Safari Charlie gun lube has lived up to its claims based on user feedback. It does what a quality gun lube should do, and it is quite affordable. So if you are looking for a good gun lube, give the lube a try, but you can also check out other alternatives.