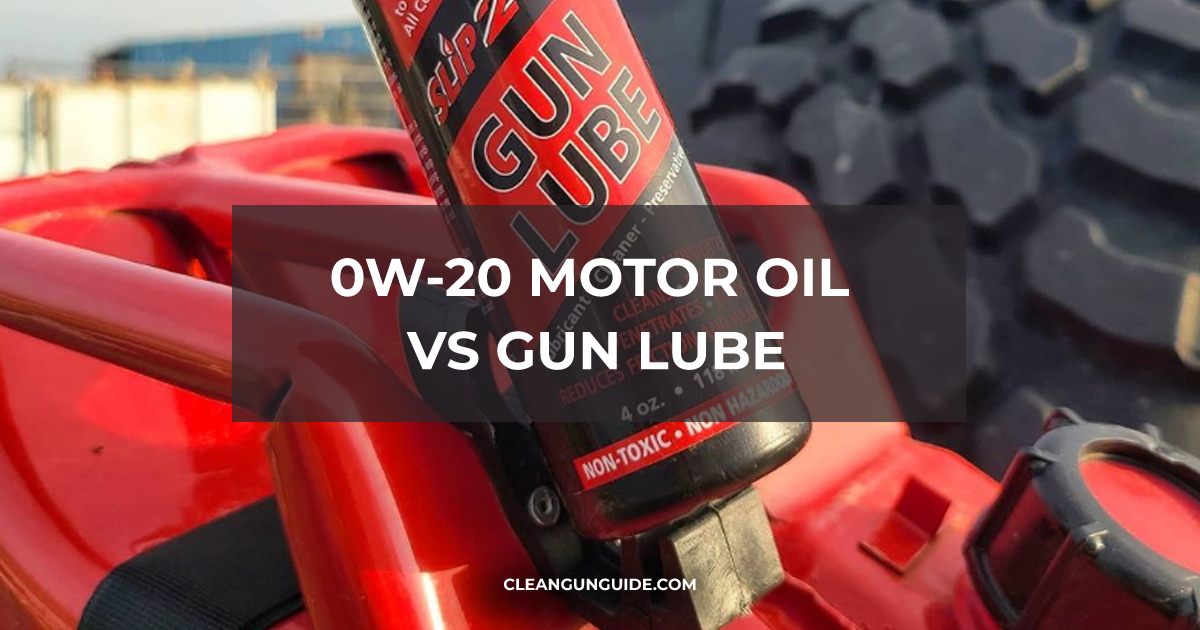 One of the hottest debates about gun lubes is whether to use motor oil to lubricate a firearm.

Now, some gun owners claim that you can and that it works. Others see it as a bad idea and will not use it no matter what because it is specifically formulated for motor engines.

Given that lubes are formulated for firearms, it doesn’t make much sense to use motor oil to lube your gun. But for the sake of those who are curious as to whether you can use motor oil as a gun lube, we are going to compare the 0W-20 motor oil vs gun lube.

The 0w-20 grade motor oil is a synthetic motor oil commonly used for lubing the moving parts of a motor engine. It does more than provide these parts with a protective layer against corrosion, harmful deposits, and dirt. It also helps reduce friction allowing the parts to move smoothly.

The oil has a low viscosity. In fact, the letter “W” stands for winter, meaning that it is formulated to flow easily through the engine parts even in extremely cold weather.

This could explain why some people use this motor oil to lube their firearms. Typically, a thin oil is needed to reach those areas of a gun that you cannot easily reach with a gun cleaning patch.

A gun lube, on the other hand, is specifically formulated for firearms. It protects the metallic and moving parts of a gun from rust and corrosion. It also helps reduce friction and keep a gun in good working condition.

There are different types of gun lubes, and this is based on their formulation. Some gun lubes contain petroleum distillates, others do not, while others are purely synthetic.

Some gun experts recommend not using a petroleum-based gun lube because it attracts dirt and dirt and holds powder residue. The good news is that there are many gun lubes that don’t contain petroleum distillates.

Although the 0w-20 motor oil is a synthetic oil, much like many gun lubes, it does not contain a lot of the rust inhibitors you find in gun lubes. It does a good job of lubing the moving parts of a gun, allowing them to move smoothly and without friction. But that is just about all it does.

You can use it while hunting just to keep those moving parts running well if you don’t have a gun lube in hand. But if you want to lube your gun to protect it against rust and corrosion, the 0w-20 is not the ideal solution. In fact, you should not use it at all if you want to protect your gun from the effects of use.

You need a gun lube that can protect your gun’s interior and exterior metallic parts from corrosion. And not just for a short period of time, but for a lengthy period.

Some gun experts say it’s alright to use 0w-20 or other synthetic motor oil to lube the inside part of your gun, but not the outside. But this is only when you are using your gun.

If you plan on lubing your gun before storage, it is recommended to use a gun lube. The reason is that even when a gun is in storage, it can become rusty if it’s not lubed with an oil that contains rust inhibitors.

The 0w-20 motor oil is not a good substitute for gun lube because it does not do a good job of protecting the metallic parts of a gun from rust and corrosion. You can use it to lube the moving parts of a gun to get them working smoothly. Plus, it also helps reduce friction.

But to protect your gun from rust and corrosion, it is recommended to use a quality gun lube because it contains rust inhibitors. On top of that, it is not toxic on the skin like motor oils, and it is resistant to oxidation.