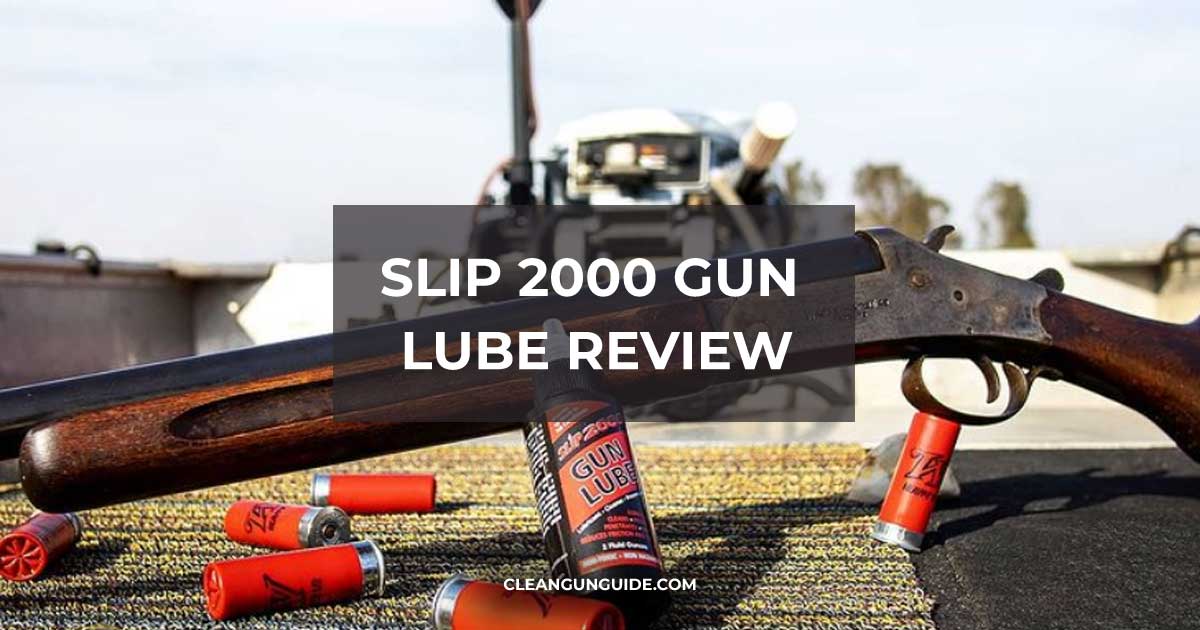 The Slip 2000 gun lube is a synthetic lube that does not contain petroleum distillates, mineral oil, silicone, or Teflon. The lube has anti-wear properties and can withstand temperature changes between -110 degrees Fahrenheit and +1250 degrees Fahrenheit.

The gun oil serves as a cleaner, lubricant, and preservative. When applied to the metallic parts of a gun, the lube does not evaporate or dry out. It also does not leave messy residue or become sticky. Compared to petroleum-based lubes, the Slip 2000 lube does not hold or attract power residue, dirt, or dust.

Its unique formula has a low viscosity and will flow to the tightest areas that other lubes cannot reach. It permeates the micro-pores of the metal and bonds with it, proving a protective barrier. This is to keep your firearm in good working condition over an extended period.

Some lubes don’t provide a long-lasting protective barrier, and others evaporate or dry out quickly. One of the key features of a good gun lube is its ability to stay in place when applied to protect a firearm from rust or corrosion, mainly when it’s not in use.

You don’t want to use a gun oil that dries out quickly to the point where you have to regularly lube your gun even when you are not using it. You need a quality lube that, when you use it once, your gun will be good for a prolonged time without needing another session of lubing, of course, until the next time you use your firearm.

This is why the Slip 2000 gun lube is so attractive. It is formulated to remove dirt and carbon fouling, protect your firearm from rust and corrosion, and provide an additional protective coating.

The Slip 2000 gun oil formula contains highly advanced additives to strengthen its anti-wear properties. It has a low viscosity and will therefore penetrate tight spaces providing a protective barrier in these areas.

The best part is that it permeates through the micro-pores of the metal bonding with it. So even if you wipe the metal surface to the point where it feels dry to the touch, the oil is still there working its magic. This is something you don’t get with many gun lubes. They may leave a thin protective film; however, it does not last long.

The Slip 2000 gun lube will help remove carbon fouling, dirt, grime, and dust from your firearm. It will also help remove corrosion and copper and lead residues that can cause malfunction problems if allowed to buildup.

Since it gets into hard-to-reach spaces, it penetrates fouling and trapped dirt, grime, and grit, loosening it while dissolving carbon buildup. This makes it super easy to clean a dirty firearm, and you may not even need to scrub the dirt and fouling off. It is just that effective and powerful.

Although a gun lube does provide a protective barrier, it is smart to use a preservative to form an extra layer of protection against moisture. The Slip 2000 gun lube does exactly that; it functions as a preservative and creates a barrier that will protect your firearm from rust and corrosion.

The Slip 2000 gun lube is formulated for both small caliber and large caliber firearms. It is suitable for shotguns, rifles, pistols, and revolvers. It is great for cleaning gun barrels, bores, breeches, firing pins, slide rails, and other metallic parts.

It is easy to use, and it’s not messy, neither is it sticky. The lube is available in plastic bottles that come with a spray or needle tip applicator.

Apply a small amount on the areas you want to clean and let the oil sit for about 10 minutes to give it time to penetrate through the fouling and dirt and the micro-pores of the metal.

This should make it much easier for you to remove the loosened dirt and fouling with a brush if necessary or just a clean patch. Also, it will give it time to bond with the metal protecting it from moisture.

The Slip 2000 gun lube falls under the category of Green products, and it is formulated with the safety of the environment and your health in mind. It is made with biodegradable materials and does not contain any hazardous or toxic materials.

The Slip 2000 gun lube is easy to use. It comes with spray and needle applicators. You don’t need to do much other than apply the oil and let it work its magic.

The gun lube is formulated to serve as a cleaner, lubricant, and preservative. It is ideal for firearms, fishing equipment, chairs, bows, generators, hinges, musical instruments, and more.

Generally speaking, this is a lube that you can use for cleaning just about anything metallic, and the fact that it does protect against moisture, you can use it on almost any type of metal that is prone to rust and corrosion. You can also use it to clean plastic gun parts, and it’s also safe to use on polymers.

The Slip 2000 gun lube has a ton of positive user feedback. Many customers have reported that it provides deep protection and noticeable improvement in the performance of their firearms.

This is a clear indication, if anything else, that the lube efficiently removes dirt and carbon fouling and protects firearms from rust and corrosion. Although it has a higher price tag than other similar products, it is worth every penny.