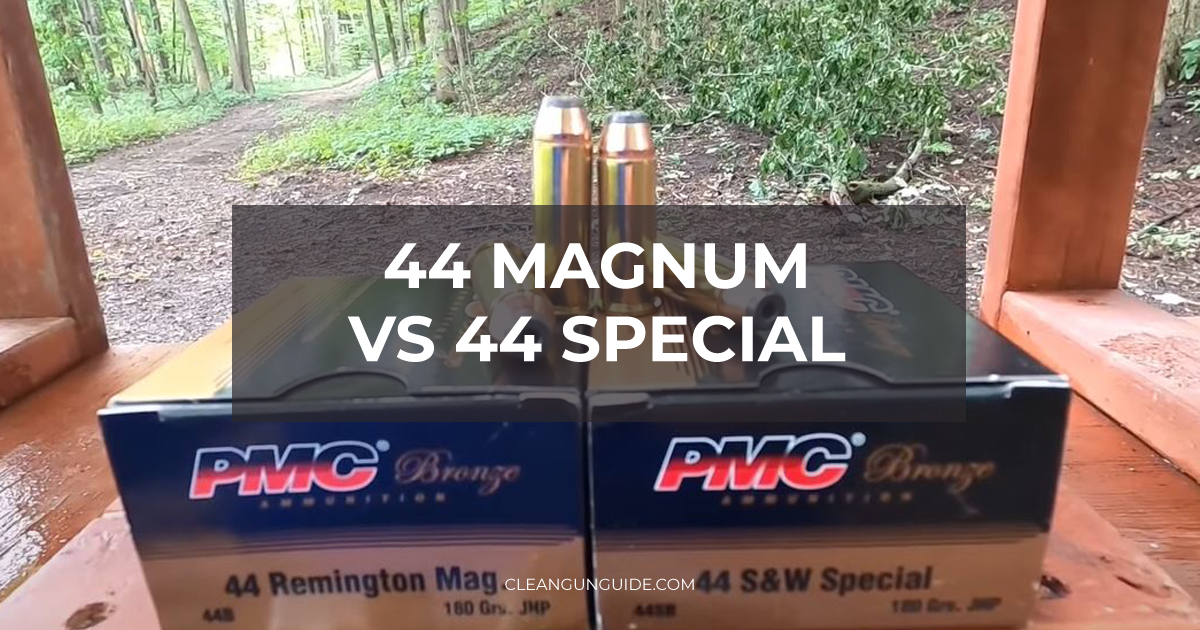 Both the .44 Magnum and .44 Special are large-bore cartridges that are chambered in revolvers. Both cartridges have their pros and cons, and they are both suited for different situations.

In this article, we have discussed each of them, how they differ from each other, and what situations they are best suited for.

The .44 Magnum is a large-bore cartridge designed for revolvers, and it’s sort of the updated version of the .44 Special cartridge. The cartridge fires large and heavy bullets at high velocities. Generally, it uses a 240-grain bullet, and it has a velocity of 1350 feet per second.

Its muzzle energy is 971 foot-pounds; therefore, it does pack a punch, which is why it is the preferred cartridge for hunting and target shooting. However, it produces a lot of muzzle flash and felt recoil because of its high pressure, so it’s not ideal for use by law enforcement.

But when it comes to hunting medium to large-sized game like elk and buffalo, shooters prefer it because it’s accurate. In addition, there is an advantage to the heavy and flat-point bullets the cartridge uses compared to the thin pointed bullets used in many hunting cartridges.

According to ammo experts, pointed bullets deflect easily when they come into contact with, let’s say, a bush or twigs. This is not the same with the flat-point bullets the .44 magnum uses, which explains why it is the preferred choice of cartridge for hunting.

The drawback of the .44 Magnum is that because it delivers heavy bullets at high velocities, it’s only accurate at 100 yards. A heavy bullet tends to move slow, and its trajectory drops past 100 yards. So ammo experts say that for accuracy purposes when shooting a .44 magnum, shooters should limit the range to 100 yards or less.

The .44 Special is a revolver cartridge that was developed in 1907 by Smith and Wesson. It is a decent cartridge, and although it’s not as powerful as a magnum, it’s a good option for self-defense.

Besides that, the .44 Special loads bullets that weigh between 135 grains to 256 grains. And it has less felt recoil and muzzle flash than the .44 Magnum.

That being said, the cartridge can be loaded to .44 magnum revolvers, which is why most people use it for practice shooting.

The .44 magnum cartridge has a higher velocity and muzzle energy than the .44 Special. Although both cartridges are good options for self-defense, the .44 Magnum is better suited for hunting.

In addition, the .44 Magnum has a slightly longer case than the .44 Special, which means that it cannot be chambered in weaker or older .44 Special guns.

This all depends on your shooting situation.

The .44 Special is more suitable for self-defense and target shooting because it has less recoil and muzzle flash, and it’s less expensive.

Also, if you are a newbie, it’s best to go with the .44 Special than the .44 Magnum because it is a medium-velocity cartridge, which means it’s easier to handle.

Looking at the differences between the .44 Special and the .44 Magnum, it’s clear that the Magnum has better ballistics than the Special. Both cartridges are ideal for personal defense, but when it comes to hunting big game, the .44 Magnum takes the cake.

The good thing is that you can use the .44 Special in .44 Magnum revolvers for practice shooting because it has less felt recoil and muzzle flash. Additionally, .44 Special cartridges cost a lot less than .44 Magnum cartridges, which is why they are great for target shooting.